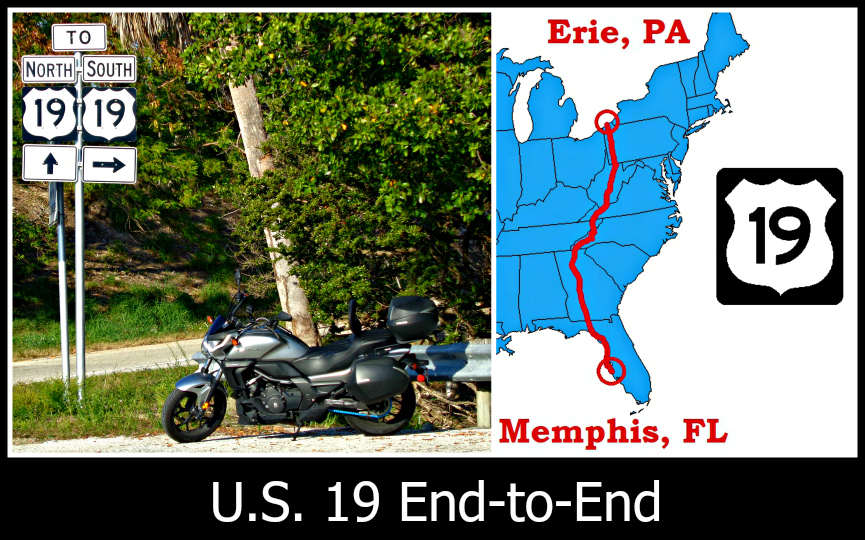 Nine and a half days, seven states—one highway.

I have always been fascinated with the idea of riding a long highway all the way from one end to the other, and U.S. Route 19 seemed like an obvious choice, since it starts just a few miles from the marina where Salacia (the Island Packet 31 aboard which my wife and I live) is docked for the time being. So I took a week off and rode the entire length of it, hitting seven states on the way up, and adding an eighth (Maryland) taking different roads on the return trip. Here are a few of the highlights from the adventure. 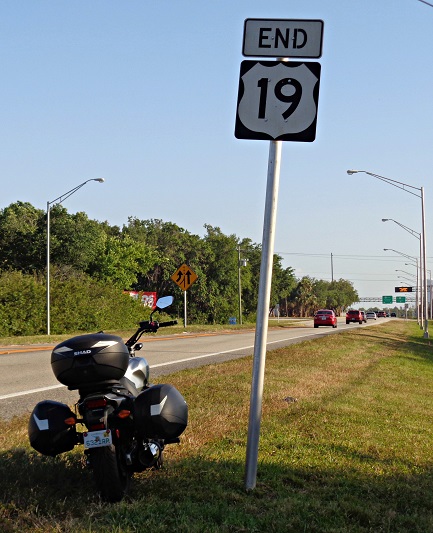 This unassuming spot is the southern terminus of U.S. 19 in Memphis, Florida, where it merges with U.S. 41. 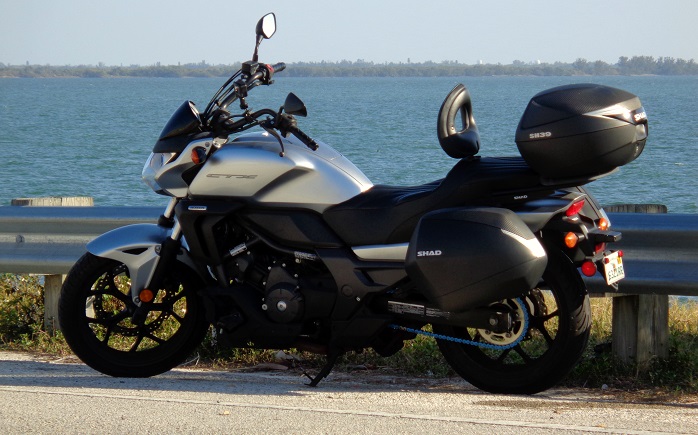 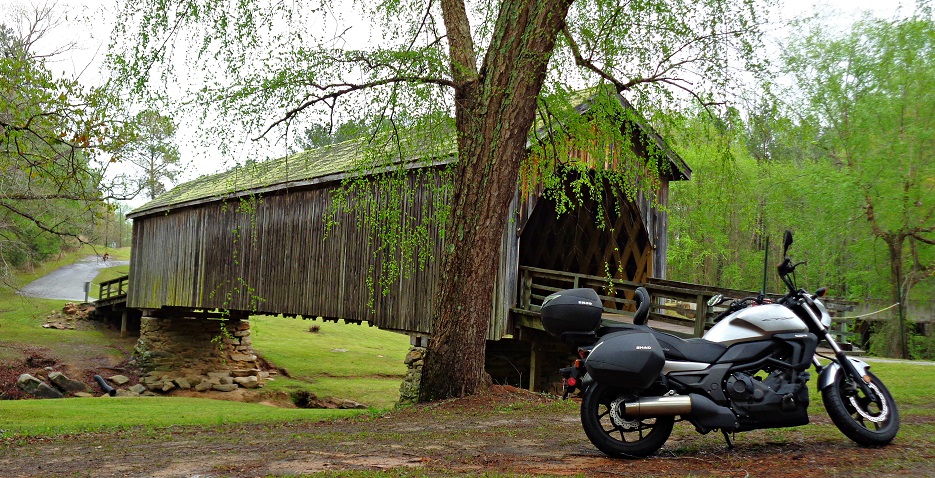 Just outside Thomaston in Upton County, Georgia: Charley parked next to the Auchumpkee Creek covered bridge, built in 1892. 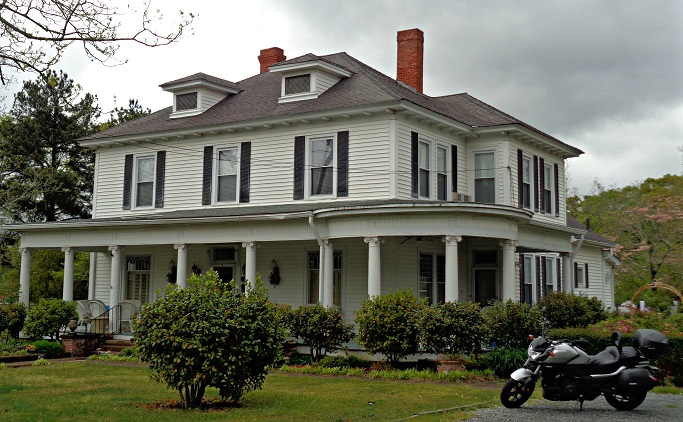 Woodall House, my lodging for the night at the end of leg 2. 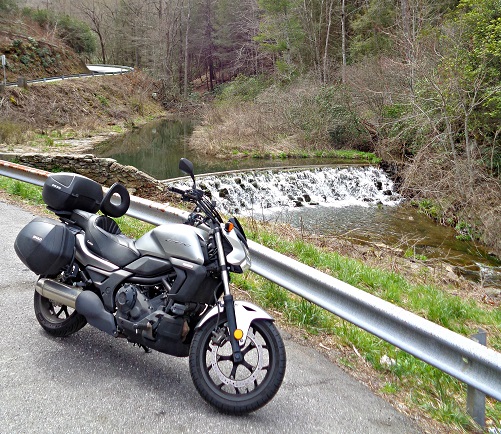 Pulled over to rest for a moment at this quiet, scenic spot. 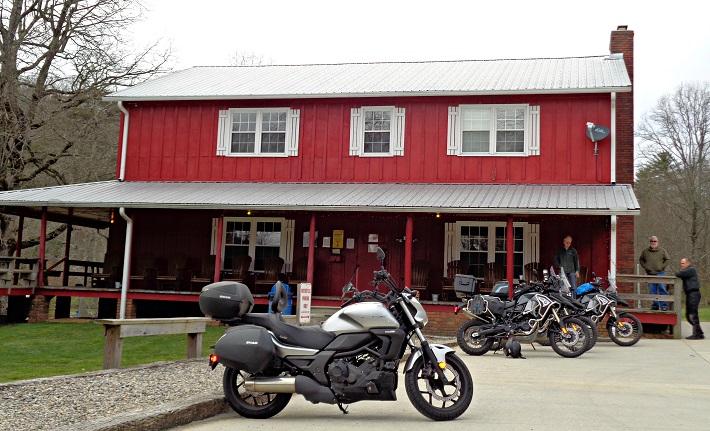 Two Wheels of Suches, my lodging for the night at the end of leg 3. 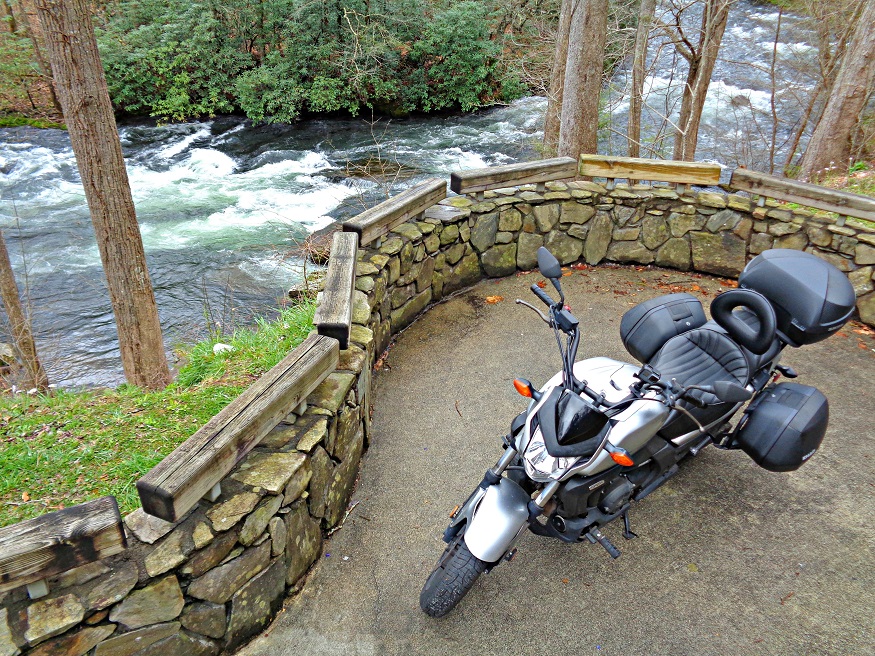 U.S. 19 follows the course of the Nantahala River for several miles in North Carolina. 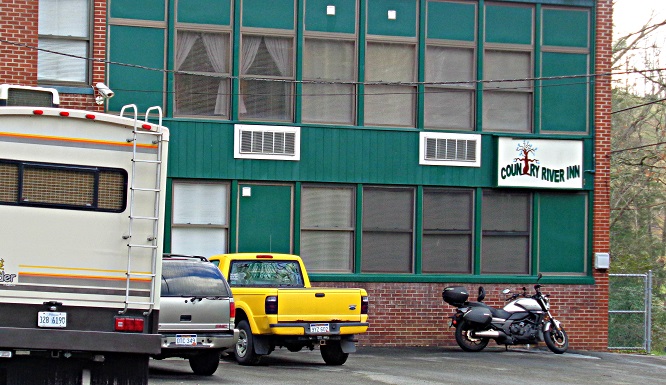 My accomodations at the end of leg 4—one of the two longest and coldest riding days of the trip—was Country River Inn in West Virginia
CRI is a former public schoolhouse converted into a surpisingly comfortable bed and breakfast. 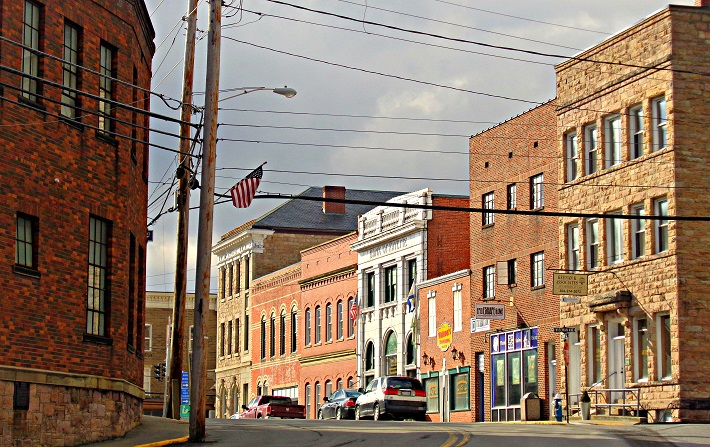 Fayetteville, West Virginia at dawn as I embarked on leg 5. 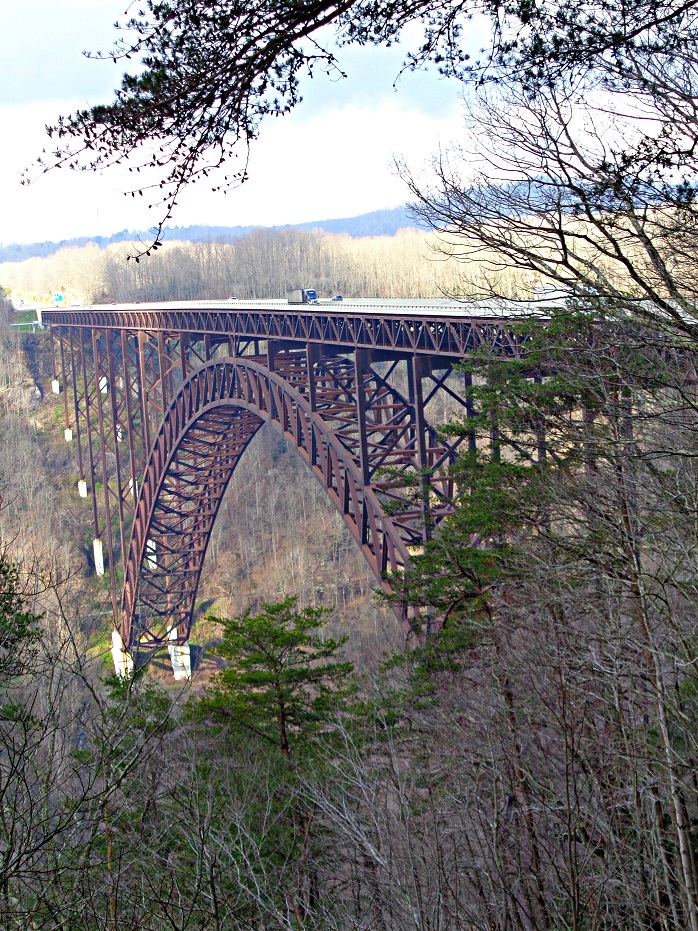 The most spectacular part of U.S. 19 is where it vaults across the New River Gorge, 876 feet above the water.
I took this picture from an overlook at the interpretive center on the north side. 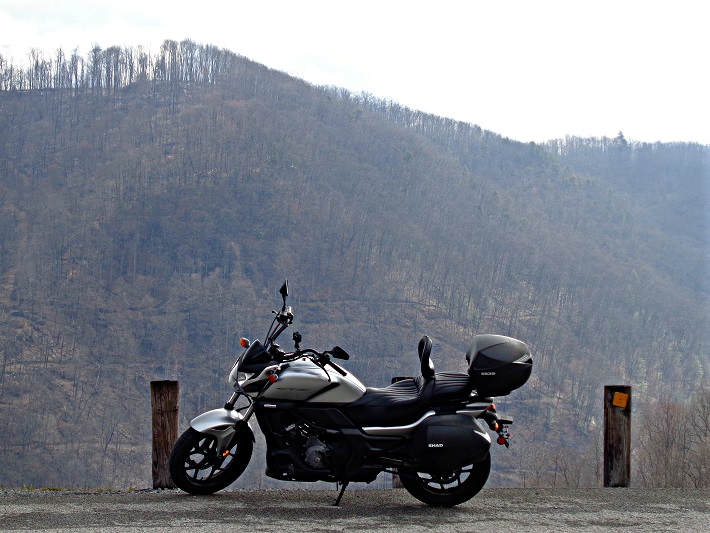 Parked at an overlook in West Virginia. 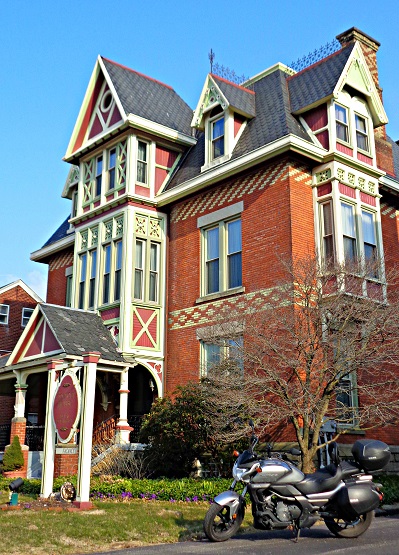 A late blast of spring-defying winter weather turned leg 5 into an almost unbearably long and unseasonably freezng-cold ride, but with some mixture of determination and insanity, I finally reached my destination: Erie, Pennsylvaia, the northern terminus of U.S. 19. My lodging for the next two nights was Spencer House, a beautifully restored, sumptuously furnished three-story Victorian home constructed in 1876. The Captain's Quarters, the top-floor room where I stayed, had its own private Jacuzzi tub. After a hours of riding in the cold, a hot soak with a glass of whiskey was a welcome and appreciated culmination to the day. 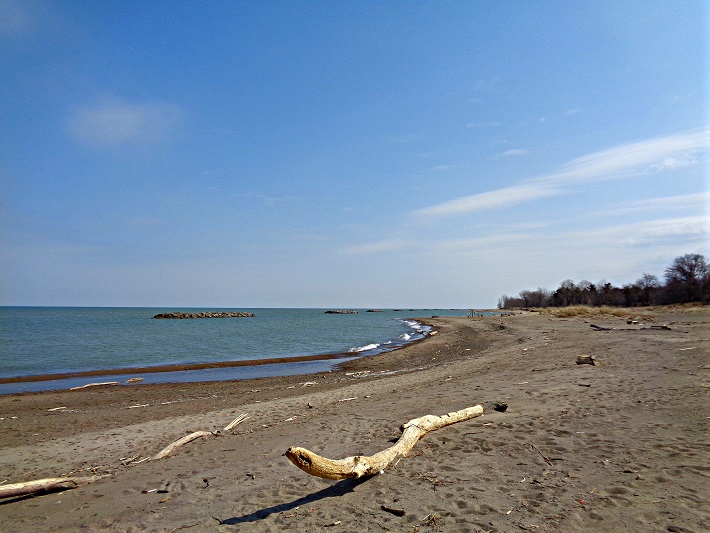 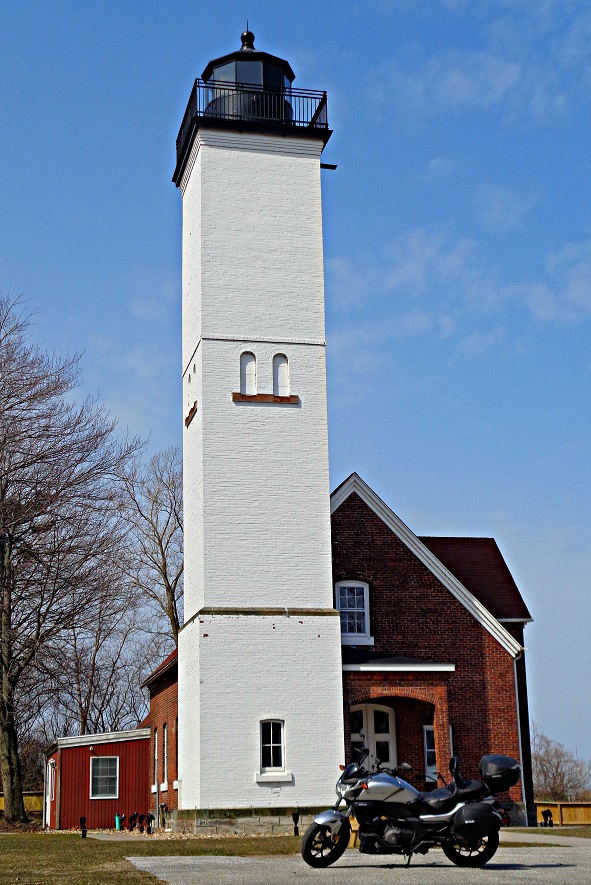 Charley parked in front of the Presque Isle Lighthouse. 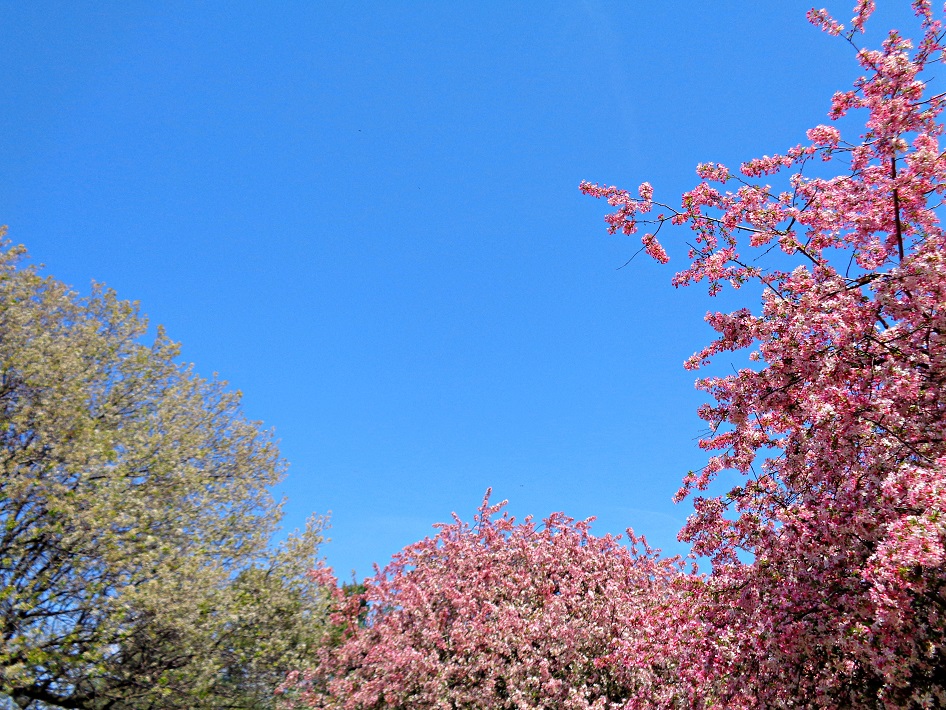 Consecutive days of relentless mist, drizzle, snow flurries, and temperatures in the 30s gave way at last to some proper April conditions, and I was able to enjoy blue skies, warm sunshine, and blooming cherry and dogwood.

Click HERE to return to the Travel index page and see the other road trips.